I recently discovered the word Hiraeth. It’s a Welsh word for longing or nostalgia, or a deep and irrational bond felt with a time, era, place or person. The word struck a chord as it accurately reflects the feeling I have for the home computer movement of the 1980’s.  But more remarkably I’ve also recently learned that I am not alone in my interest, and the love for retro computing is a vast and growing movement.

Back in the early 1980’s I went to High School in New York and I was lucky to be able to use the first Commodore Pets and Apple IIs. These were great systems but when I got back to the UK I found that my school didn’t have any of these computers and instead taught us about paper tape and the history of computing. However, things were changing and innovators such as Sir Clive Sinclair and Chris Curry/Hermann Hauser at Acorn computers (later to be the creators of the ubiquitous ARM chip) were starting to create affordable home computers that plugged straight into your TV and loaded and saved files from standard cassette players. These computers let students such as me bypass our antiquated school computer lessons and teach ourselves by typing in listings from popular magazines such as ZZap64 and Crash.

In 1981 (yes 40 years ago this year) Sinclair created the ZX81 powered by the Z80 chip and equipped with only 1KB of memory. Because of its price (starting at less than £50) it sold over 1.5 million units, but it was in 1982 that Sinclair struck gold with the ZX Spectrum which was priced at just £125. 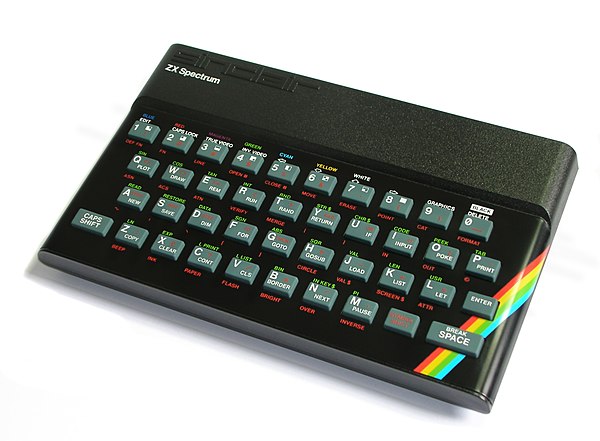 This fully colour computer was still powered by the Z80 chip but now could have an astonishing 48k which meant that some really great games were created and ship at pocket money prices. Games like Manic Miner, Jet Set Willy, the Hobbit, Football Manager and Atic Atac pushed the box and programmers to its limits. The graphics may not have been as good but the gameplay was fantastic. 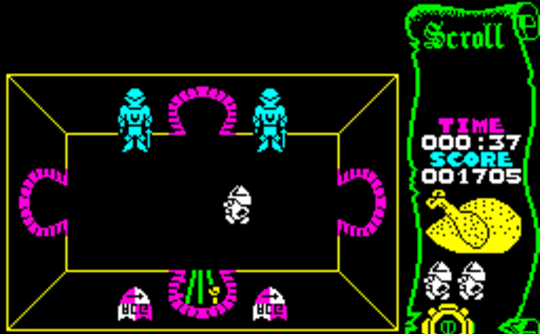 At the same time with remarkable forethought the UK government launched a computer literacy project to train thousands of students in programming and computer use. They held a competition to create a computer which could be used in a BBC show called The Computer Programme and also supplied to schools. In an acrimonious battle which eventually led to a punch up between Clive Sinclair and Chris Curry in the Baron of Beef pub in Cambridge. Acorn won the tender by convincing the government they had a working prototype which met the spec (they didn’t) and the result was the BBC Micro. 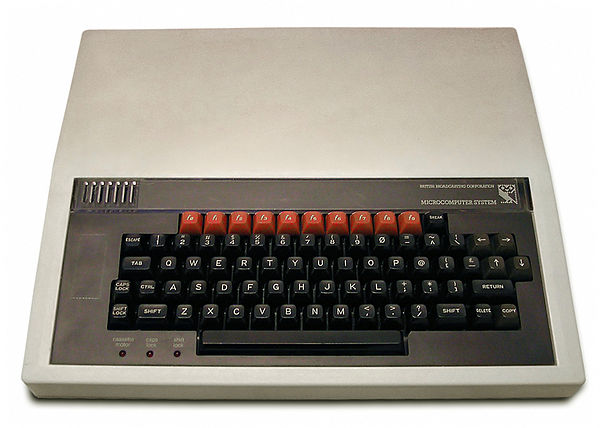 This was more expensive than the ZX Spectrum at £250 but had the advantage of a real keyboard and of course being the computer used in the new TV show and deployed in 1000’s of schools. If you ever get a chance to see the TV show Micro Men which details the competition between Sinclair and Acorn then it’s definitely worth a watch. In reality although Sinclair and  the ZX Spectrum lost this battle, they eventually triumphed in sales because of their lower price and their better software collection. The ZX Spectrum ultimately sold over 5 million units.

For me, the most important thing that came out of the Home Computer revolution of the 1980’s was the army of bedroom coders.  Rather than plugging in a cartridge or a CD as we do now on a modern games console, when you turned on a computer in the 1980’s you would be met with the BASIC prompt. At the very least you had to  learn the LOAD command, and more than likely you would also try something similar to the following so that you could annoy your local Rumbelows or Woolworths store.

Some people progressed no further, but many young programmers became wealthy before they even left school. Matthew Smith created Jet Set Willy and Manic Miner when he was just 17 and the teenage Oliver Twins at one point during the 1980s were reported to be responsible for 7% of all UK games sales while working for Codemasters which in itself was run by the Darling brothers aged 16 and 17. Codemasters was recently sold to EA for $1.2 billion.

In the USA things progressed along similar lines but with a slightly different set of core computers. The ZX Spectrum and the BBC Micro never made it to the USA (although Timex tried with Sinclair) but  companies like Commodore released first the VIC 20, and then the fantastic Commodore 64. These were relatively popular in the UK too but perhaps due to price and the dominance of Sinclair it didn’t make it quite as big here as the native cheaper versions, however in the USA and Germany (where Aldi released their own branded version) the Commodore 64 was king. I will also grudgingly admit that it was technically better than the UK computers with more memory, better sound and infinitely better graphics (more sprites and no colour clash which the Spectrum was famous for). In the USA, cassettes never really caught on for data storage and the American systems instead pushed 5 ¼ floppy drives as a much faster alternative. At the end of the 1980’s though all of these computer companies were in trouble (although for different reasons) and the 8-bit computer revolution was coming to an end replaced by the much more boring PC standardisation.

Back to the Future

Now 40 years later many of these old computers are being dusted off and restored. Several YouTube channels have sprung out of the love of 8-bit computers. The 8-bit guy can attract over 4 million views to some of his videos and in the UK the RMC – The Cave channel is run by Neil Thomas as his main job, supported by YouTube views and Patreon donations. Restorations though are only the start – new games are being created regularly and even new versions of the old computers are being made. I recently supported the funding of a new version of the ZX Spectrum via a Kickstarter campaign called the Spectrum Next. This computer was designed by the original ZX Spectrum designer, Rick Dickinson (before he sadly passed away in 2018) and raised well over $2 million.

Similar projects have recreated the Commodore Amiga (Vampire), the planned but never released Commodore 65 (Mega 65) and also a new version of the Commodore 64 called the C64 (and yes I bought this too). The advantage of these new versions are that there is no need to buy an expensive TV upscaler to get your old computers to work on modern TVs as these all come with HDMI connections and USB sockets for loading games.

All of this interest has made prices soar for the old hardware and games (although many can be downloaded). I recently tried to buy a broken ZX Spectrum and failed 3 times on eBay, each time increasing my max bid to the previous winning price before I eventually I had to pay well over £50. Similarly for a working version I had to pay well over £150, which is more than I paid for my original Spectrum in 1982. Some of the original magazines such as Crash and ZZap64 have also returned as quarterly publications and annuals and a cottage industry of new peripherals has sprouted to create things like SD card readers and HDMI converters.

I can’t end this blog without also mentioning the Raspberry Pi. Eben Upton started the project to create cheap single board computers to inspire children as he was finding that less and less people were applying to take Computer Science at Cambridge University where he taught. This project has been amazingly successful; the Raspberry Pi is now one of the best-selling computers and as of December 2019, more than thirty million boards have been sold most of which are made in Wales.  The latest release of the Pi – the 400 – comes in a keyboard and looks very similar to the 8-bit computers of the 1980s – whether this was intentional or not the result has been the same and has given thousands of children and hobbyists a cheap platform to develop and create and as a result a new generation of engineers and programmers has been spawned. The boards start at as little as £5 for a Pi Zero but the 400 computer below is about £65.

And of course, the Raspberry Pi is a great platform for playing Retro computer games too. There is an application called the Retro Pi which loads emulators for computers such as the Commodore 64, the Spectrum, the Atari 2600, Playstation 1 etc. Most of the games are also available to download if you know where to look.

I started this blog by mentioning the 40th anniversary of the ZX81 with its 1KB of memory and the ZX Spectrum with 48k. If you want to understand how little this is compared to modern day standards consider that the word document I used to create this blog was over 190kb and the jpeg image of the Spectrum Next (shown above) was 56kb. But yet in the 1980’s games were created that pushed these systems to their limits using less than 16kb. While you sit and wait for your laptop to boot up next time consider whether today’s budding computer programmers could improve their skills by looking at one of these older systems and try to write a game using less than 48kb? I wonder if the discipline and skill needed for this could create a new generation of bedroom coders?