DevOps Teams and Operations Teams are responsible for managing highly distributed and increasingly complex hybrid networks consisting of physical and virtualized infrastructure. Services and applications may span both on-premises systems and cloud-based solutions. The dynamic nature of the virtual infrastructure provides new challenges for all support teams.

This blog will review how Topology Manager achieves this and highlight the key benefits for DevOps and Operations teams.

So, what are the use cases for Topology Manager?

DevOps Teams can launch directly into the Topology Viewer from various tools within Netcool OMNIbus Event Viewer. The delta view overlays topology differences between the time an event was generated and one minute before the event. This enables resource changes to be easily identified, and engineers to understand how the status of resources changes over time, ultimately leading to quicker root-cause identification and issue resolution. The time delta can be adjusted by dragging the “pins” shown in the below screenshot. 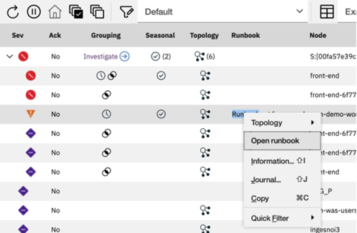 Topology Manager builds the topology database both from existing sources and by active discovery of networks and applications. Resource types, resource relationships and resource status is stored in a Graph DB. Data from multiple sources is merged to deliver a consistent and complete picture of the resources and the relationships.

Topology Manager exploits data from existing solutions that maintain a partial view of infrastructure, service or application resources and relationships, for example, application performance management tools or change management systems. Topology Manager Observers continually ingest data from those solutions and, where available, the status of the resources. Observers are available for many technologies, including CISCO ACI, AWS, GCP, Microsoft Azure, AppDyanmics, Dynatrace, ServiceNow, Docker Networks, Kubernetes and OpenStack. Multiple Observers will be deployed in a given Topology Manager instance to build the full picture for the environment.

Critically, a historical record of the topology data is maintained for up to 28 days, data exploited by the Netcool OMNIbus Web GUI integration, as demonstrated above.

The health of a resource is represented by its status. The status may be Clear, Indeterminate, Warning, Minor, Major Critical. Status data can be collected by Observers and Discovery services, where available, but also correlated with events from Netcool OMNIbus, the event management solution. It is in such environments, where Topology Manager is integrated to Netcool OMNIbus, that the DevOps and Operations Teams benefits can really be exploited. 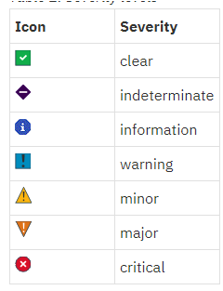 Topology Manager can be installed on-premises or on-cloud and as a standalone deployment or part of the Netcool Operations Insight or Watson AIOps (see this Blog for a high-level comparison of the products).

A standalone deployment, delivered as a set of Docker containers or within Red Hat OpenShift, can be integrated into an existing Netcool OMNIbus instance to deliver in-context launch-out from events to the Topology Viewer.

If you have any question on Topology Manager or would like to arrange a demonstration, please contact Orb Data at info@orb-data.com.